Along with most other York Open Studios artists, I have a piece in this Taster Exhibition (30th & 31st March). Entitled 'Vasilisa the Wise' this is a hand-stitched piece using vintage fabrics.

‘Vasilisa the Wise’ appears in a number of Russian folk tales such as The Firebird and Baba Yaga; her other names include Vasilisa the Fair and Vasilisa the Beautiful.

In one version Vasilisa is a highly skilled embroideress – so something to aspire to! The meaning behind this in Russian folk culture is that she is now ready for marriage: she has honed her skills by hand-sewing her wedding clothes and other dowry items.

My original design has been inspired by different ideas; firstly, Vasilisa’s cunning in defeating evil in various stories (girl power in action!), hence only the top of her head is peeping out as she prepares her next move. Inspiration has also come from traditional folk head-coverings in Slav cultures. Called ‘kokoshnik’ in Russian and stemming from the old Slavic word for a hen/cock (i.e. a reference to the bird’s crest), these festive headdresses appear mainly in folk tales and vary depending on the age and status of thewoman and the geographic area from which she hails. By showing her headdress as organically growing flowers, I have hinted at Vasilisa’s agile mind as well as linking to the strong tradition of fertility symbolism in Russian folk art.

Coincidentally, Selvedge magazine’s latest issue (no. 87) focuses on folk art and includes an article about Ukranian folk costume; one photo depicts a young woman with a headdress full of fresh flowers.

For further information about kokoshniks. 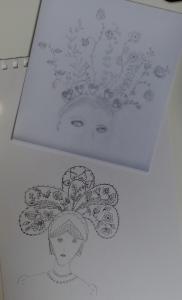 Back
Back to Blog

– Made with in Yorkshire –